This week the Hazelwood Power Station, a brown coal dinosaur build in the 1960s, was turned off for the final time.

Over its lifetime the power station pumped out roughly 800 million tonnes of carbon dioxide pollution. Per kWh it had the highest emissions intensity of any power plant in Australia. Its shut down will result in Australia’s annual carbon emissions dropping by at least 1 percent over the next 12 months, and more over time as gradually coal generation is phased out of the country. And it marks a significant turning point, where finally Australia is starting to unmistakably turn its back on coal generation and the associated emissions.

Unfortunately a lot of the news on this has lead with “25%”. Story after story has started with the statement “Victoria is losing 25% of its generation capacity” and then the word “blackouts” somewhere else in the story. You may even hear a former Prime Minister warn that its shutdown is foolish and infer that it will lead to economic ruin. But you don’t hear the word 15% very often. You won’t hear that over the last 8 years electricity consumption in Victoria has dropped by 15%. You won’t hear much of the quiet story of energy efficiency and rooftop solar and energy efficient appliance and building standards, all of which have cut electricity consumption, without which another coal power station would be being built. And this in the state with the highest rate of population growth in the country! 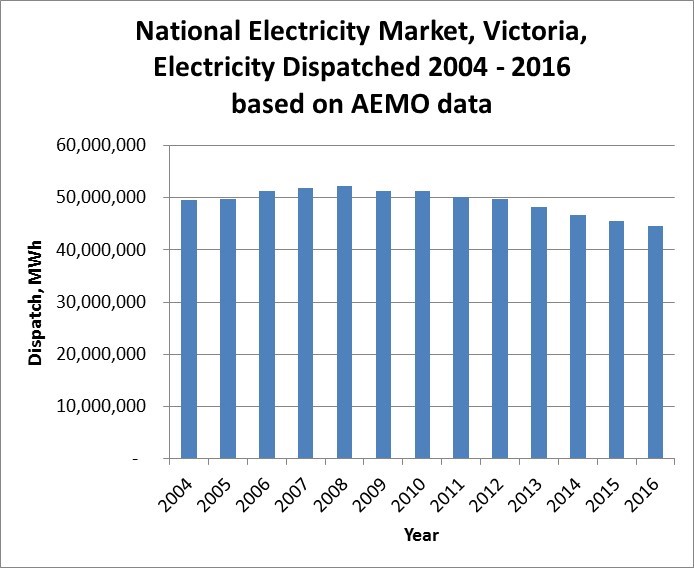 Take on the challenge

When it comes to reducing peak demand, well as the graph below shows whilst this isn’t dropping in a steady fashion, it is being managed. And the overall trend since 2008 is down. 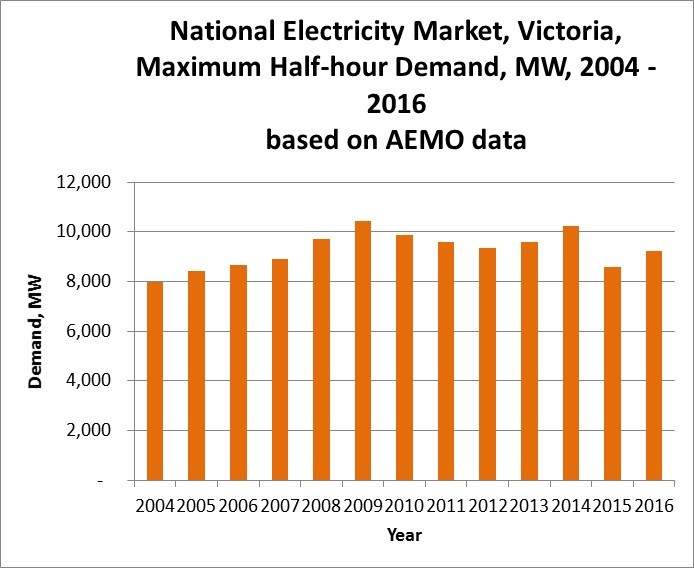 But this graph also highlights the challenge of moving to renewables, managing high demand when its cloudy and still. And its a great opportunity to optimistically focus on how we do this, to adopt a “can do” attitude, rather than to scaremonger, to look at the new economies that could be built and create jobs in the Latrobe Valley. To explore ideas for new economies in the Valley such as pumped storage and geothermal and solar hot water system manufacture.

To celebrate initiatives such as the proposed Snowy Mountains pumped storage project announced recently by Prime Minister Malcolm Turnbull. To support innovative companies such as Green Synch, who enable load shedding to reduce peak demand, and Habitech Systems which make low and zero net energy homes. To support a culture of innovation. To learn from what Hydro Tasmania has done at King Island to aid the switch away from fossil fuels.

Lets make the story about how we have cut electricity consumption by 15% and how we can do more, much more, to further reduce consumption and better manage peak demand.

This site uses Akismet to reduce spam. Learn how your comment data is processed.